Are you familiar with the saying that blondes often have more fun? Well, based on a new study, this isn’t that accurate anymore. As a matter of fact, it has been suggested that brunettes are actually better in bed! For some of us this is not a secret, but is it really up to the hair color? Do you believe that there is any co-relation between the two hair color and sexual mastery? Or it is just the fact that you wanted it more with a brunette and that make the whole experience better and you rate her as a better lover.

Kidding aside, a study came out just recently and according to 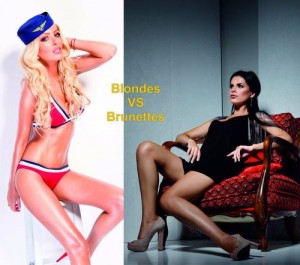 this survey, six out of ten people believe that brunettes are actually better in bed as compared to their blonde counterparts. However, should this be enough to conclude that blondes are better than brunettes or it’s the other way around? Let’s find out!

What Does People Think When We Talk About Beauty?

Although there’s no formal definition of beauty, throughout the history of mankind, it’s difficult to say that the society still hasn’t come up with an impression of what “beauty” should look like. Obviously, this is the main reason why we have fashion magazines, billboards, and models. That said, when people think of beauty, or a face that would describe this– most will instantly think of Marilyn Monroe. But that’s old, in recent times, that has changed. The image of beauty are the Victoria’s Secret’s angels and they have a variety, they have blondes and brunettes.

As we think of Marilyn Monroe, the first think that will come to mind is her blonde hair– her iconic platinum blonde locks, and this is where the term “bombshells” originated.

This is where the cliché popped up;
– Blonde is better
– Blondes have more fun
– Blondes are beautiful

However, let’s not be biased around here, what can we say about the brunettes?

As compared to blondes, we can say that brunettes are more intelligent. And those who aren’t, they can easily disguise their low IQ and poor common sense quite well. Aside from that, hazel hues seem like they can easily retain information– just think about it, the Kardashians look a little more intellectual than Britney Spears and Paris Hilton, right? But maybe that’s just the look. Were does all that come from, is it just the society that indoctrinates us or it is the jokes about about dumb blondes. Or it is actually the fact that you know few blondes who are really stupid and you can’t compare their intellectuality to your brunette girl friends.

2. Being Brunette Is Cheap

The problem with being blonde is you have to do monthly touch ups or else, it will look weird. This isn’t something you’re required to do if you’re a brunette. Or is it? Maybe this is not right too. Maybe it requires the same effort to maintain a beautiful hair by any color. But on the other side have you considered that it is not about the comparison between blondes and brunettes, but about these who take extra care for their outfit and those who don’t

Think of Miley Cyrus and Katie Hopkins – they seem like hogging all the attention right? However, try to think of the most famous brunettes, such as Victoria Beckham and Kate Middleton– they’re considered to be more respectable than the former. Blondes look and give the impression of easy target for men, which make them less respected.

According to a study, fair-haired women are usually the most adventurous in bed, while the brunettes are considered to be more reliable in a relationship.

– In a poll of 1,500 men, more than 60% of them consider that the dark-haired girls are the most loyal and trustworthy. On the other hand, only 14% prefer blondes.
– 61% claim that they’d prefer to marry a brunette.
– 34% believe that blonde women look like glamour model, while 42% think brunettes are sexier.
– 51% of men also believe that brunettes are better kissers, and 47% think they’re the most sensual

The Bedroom – Blondes VS Brunettes

Nevertheless, when it comes to bedroom stakes, the blondes win the prize. Why? 36% of men like girls with light-colored hair, and they consider them as the wild ones. But this again is connected to the men’s fantasies and desires and not so much to the fact that they blondes do something more in bed. A funny fact is

that every man imagines a sex with a blonde to be great, but very often happens to be disappointed after the act. As it turns out that the blonde barbies are much more static in bed and sometimes it feels you are a necrophiliac.

Overall, blondes always have the reputation of being carefree, fun, and adventurous. Apparently, this can also be applied in relationships, because men believe that these women are great in bed. There is also another aspect of the story, that men feel so much confidence and proud to be seen in the public with a blonde. This shows how good they are, what great achievement they’ve reached. And that they are the bad guys, choosing the bad fire girls over the security that they would have in a relation with a smart brunette.

However, when it comes to other aspects, it seems like brunettes are considered to be the “ideal” partner. Somehow they are considered more reliable, smarter and in general the type of woman men want to marry for.

The practice in our business

Ponju Escorts is a website that offers cheap escort services in London. We are not an agency, but more like a place that advertise independent escorts. We have been on the market for over 5 years with different brands and we have some observation on that topic too.

I have always thought that the reason for men in London to prefer brunette escorts over blondes is that we have many blonde barbies in the UK and maybe they are kind of exhausted of them. With one expression men are saying: “We know them, we love them,  but we’ve had enough. We want some brunettes”

We are proud to offer the cheapest prices for escorts in London of just £80 per hour for an outcall service, but still the quality is great.

We have one of the best selections of brunettes around London. They are mostly European girls coming from Poland, Russia, Ukraine, Spain, Hungary and more.